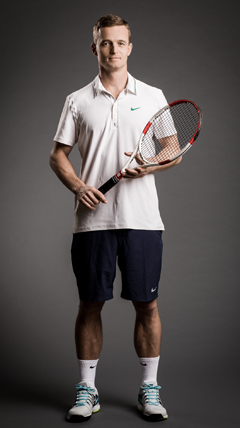 He is a graduate of the University of Physical Education in Warsaw and holds a Master degree in Movement Rehabilitation. Łukasz is a licensed master class tennis coach and has completed post-graduate studies for tennis coaches in the Academy of Sports Coaches in Warsaw. He regularly participates in numerous workshops and conferences for tennis coaches. Łukasz is a former professional player who was highly ranked in the lists of the Polish Tennis Association. He has 17 years of professional experience. In 2005 he participated in a coach internship at Evert Tennis Academy in Boca Raton, Florida, a place recognised as the best tennis training centre in USA. In 1998 and 1999 he worked as a coach at Swarthmore Tennis Camp in Pennsylvania. During his coaching career he has trained several Polish champions and other numerous players ranked in the top "10" of the Polish Tennis Association’s official rankings.

He is a graduate of the University of Physical Education in Warsaw and holds a Master degree in Physical Education. He is a licensed class II tennis coach with 15 years of professional experience. Tomasz was a top player in Poland and leader of the lists of the Polish Tennis Association. He is a 9-time Polish champion, 4-time Vice-Champion and 4-time bronze medallist in the Polish championships in singles, doubles and team competitions. He represented Poland thrice in the European Team Championship and is a 4 time finalist and semi-finalist of tournaments in Denmark, Luxembourg, Germany and Belgium. He has won 32 national tournaments and was runner-up at 24. From 1993 to 1997 he was coached at the Peter Burwash’s International Bio-Hotel Stanglwirt in Austria - a tennis training centre repeatedly recognised as the best in Europe by Tennis Magazine and Tennis Resorts Online. As a member of the Polish National Team, he also underwent the central training programme (1990-1997) of the Polish Tennis Association. In 2000, he worked as a coach at Swarthmore Tennis Camp in Pennsylvania. Throughout his career he has had the opportunity to challenge his skills with numerous stars from the world of tennis including Marat Safin, Xavier Malisse and Lleyton Hewitt.

We invite for tennis lessons Call or write an e-mail